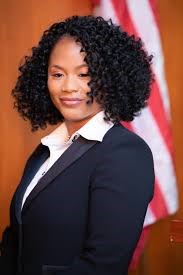 Judge Toria J. Finch was elected to the bench of Harris County Criminal Court at Law No. 9 on November 6, 2018. Judge Finch's platform is focused on restoring Truth, Justice, and Fairness to the Criminal Justice System.

Judge Finch is the youngest child of three siblings, and the proud daughter of the late Pastor Harold W. Finch, Sr. and Dr. Janet M. Finch. She is a first-generation attorney from Nashville, Tennessee. Judge Finch has devoted her life and career to seeking out effective ways to inspire positive change in the lives of individuals and the community. The tenets of Judge Finch's foundation are centered on Faith, Family, and Community. As Judge Finch is blessed to ascend to greater heights in her career and personal pursuits, she never forgets those who have paved the way for her and is purposeful in doing the same for others.

Judge Finch earned a B.S. in business marketing at Alabama A&M University and became a proud member of the Gamma Mu Chapter of Alpha Kappa Alpha Sorority, Inc.; earned a Paralegal Certificate from the Southeastern Paralegal Institute in Nashville, TN, and earned a J.D. from the Thurgood Marshall School of Law at Texas Southern University.

During Judge Finch's many years of practice, she has accumulated a significant amount of relevant legal experiences in the areas of civil litigation, criminal law, family law, and juvenile law. Judge Finch's work experience in the legal field includes but is not limited to being a former Assistant Juvenile Public Defender with the Travis County Juvenile Public Defender’s Office located in Austin, Texas, where she acquired Board Certification in Juvenile Law awarded by the Texas Board of Legal Specializations; an Assistant District Attorney for the Harris County District Attorney’s Office in Houston, Texas; and founder of The Finch Law Firm, PLLC in Houston, Texas. While an Assistant District Attorney, she tried various misdemeanor and felony level bench trials and jury trials, and achieved the level of Felony Prosecutor, Juvenile Detention Court Chief and Misdemeanor Court Chief.